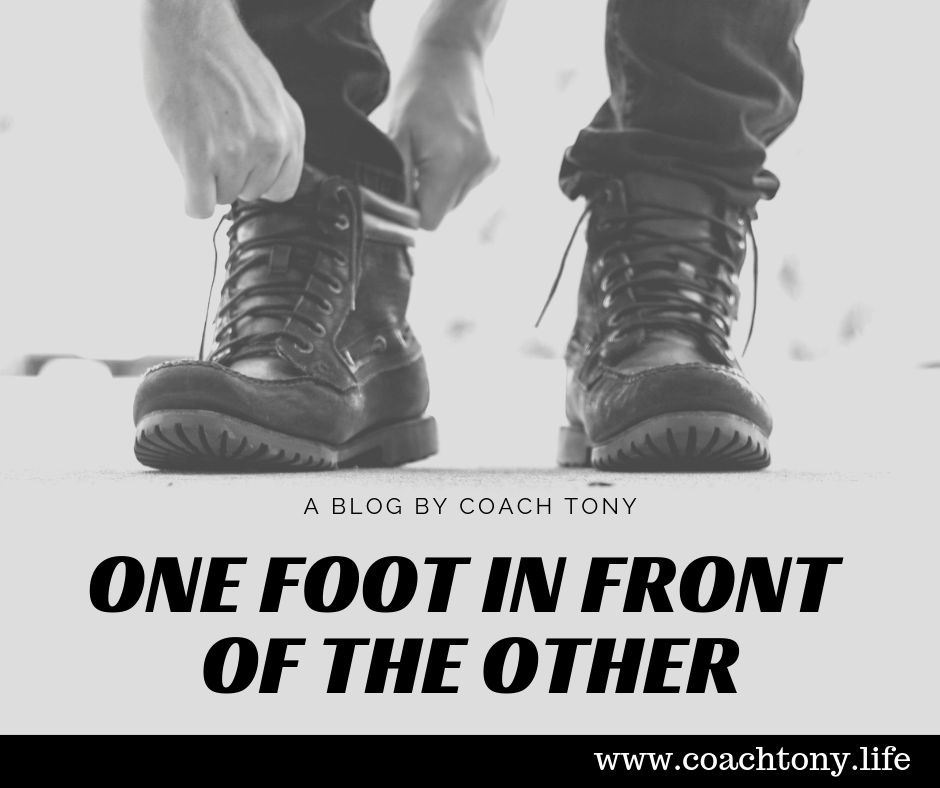 One Foot in Front of the Other

A “step,” defined by Merriam as, an advance or movement made by raising the foot and bringing it down elsewhere.  It is clear that action is involved in this motion named step. Nothing tricky about it. Yet, people around the globe are stopped from taking that one step.  Why?

Well, I believe that people are stopped not because of that one step BUT the view of the MILLION steps it will take to accomplish said goal and that is where their motivation is lost.  The key here is to keep the focus on ONE STEP which eliminates the overwhelm of the entire commitment. Be in actions that align with what your committed to creating.

If you have an idea that lights you up – get into action right away.  A few years ago my brother asked me to run a marathon. At that time I was a smoker and would half jokingly tell people I only run from “cops or bears.”  AND for some reason, still unbenounced to me, I said YES. Mind you I hadn’t ran a mile since it was mandatory in grade school which for me at that time was 20 plus years prior.  We got on the internet and found the Medtronic Marathon in Minneapolis which is where we both had moved from and registered – we had less than 5 months to train. The next day I went to a running store and acquired gear and supplies needed I also researched how to quickly and effectively train with limited time.  Blah blah blah – Less then 5 months later I ran and successfully completed my first and last marathon in a little over 4 hours. If I would have zoomed into the details and logistics of trying to run a marathon in less than 5 months I would have never allowed myself to say yes. AND I said yes to on action at a time, that aligned with me successfully running a marathon.

I share the personal story because I want you to know that I experienced HOW SCARY or how daunting some commitments seem.  I know what it feels like to be taking actions towards the seemingly impossible. What I want you to know most is, anything you want in your life is more possible than you currently realize.  You can truly have anything you want in life. You simply have to be willing to take the first step, and then the next, and then the next. One foot in front of the other.